The world isn't flat: Use enterprise context to enhance, not control

Enterprises are rich in both context and control, while new social media sites start completely flat and without either. By embracing and extending our strengths, enterprises can take a shorter journey to successful and mature social media than the consumer models that inspire us.

Most enterprise applications are built around two things:

Public social applications start with neither, but work hard to build both over time:

Practicioners attracted to Enterprise 2.0 typically start through a desire for revolution. We want to break out of the context and control forced on us by existing applications and cultural norms. We want new models to emerge, new opportunities to connect with others, new methods of working.

The best examples of these models are available in the consumer space, so our natural tendency is to recreate those tools inside the firewall. This also sits well with our desire for new models and new power. But, it is in direct conflict with the existing norms, powerbase and way of working.

We need to heed lessons on change from Machiavelli:

And let it be noted that there is no more delicate matter to take in hand, nor more dangerous to conduct, nor more doubtful in its success, than to set up as a leader in the introduction of changes. For he who innovates will have for his enemies all those who are well off under the existing order of things, and only the lukewarm supporters in those who might be better off under the new. This lukewarm temper arises partly from the fear of adversaries who have the laws on their side and partly from the incredulity of mankind, who will never admit the merit of anything new, until they have seen it proved by the event.

We need to embrace and extend. 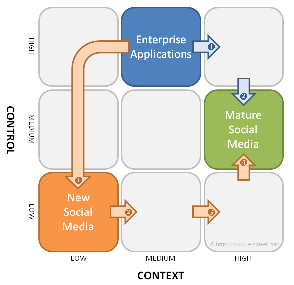 Revolution towards a consumer equivalent involves the complete destruction or ignorance of existing context and control the organisation has created. This is a huge leap of faith and not one taken easily by any established organisation.

A better approach is to embrace the existing context in your organisation. Seed your tools with information that we know to be relevant and expected. For example, when building an internal Twitter, automatically have everyone following their bosses, peers and/or direct reports. When implementing a wiki, setup areas for each existing part of the business. Don’t waste people’s time and energy requiring the recreation of structures that we already know, use and respect.

Don’t give up all aspects of control either. Some groups should have closed membership. Some areas should be locked for editing. That’s OK, the world isn’t flat.

But, extend both of the models above. Allow new context to develop without intervention. Remove controls that stop the development of context. Expect new controls and conventions to form within this community.

The context and control inside organisations is closer to the norms of mature social media applications than it is to new tools. By embracing the strengths of enterprise structures and extending by allowing users to create new context in emergent areas practicioners can drastically reduce the barriers to approval and adoption.

Comment by jilske on June 10, 2009 2:30 PM
Well written article, thanks for the insight Nathan. I can see how the synthesis of the enterprise and application context works as a catalyst allowing new synergies to develop and increase adoption. Did Machiavelli want to heed people to take baby steps and changes like embrace and extend? Does that mean there is no way to think about change more to set it up for success? Does this mean no matter how it goes about it, an enterprise won't succeed in mastering a new 'unmature' social media application as it still looking for its own context?

Comment by Project Pankaj on September 10, 2009 11:22 PM
Great article. We need more analysis on enterprise 2.0 technologies, and how they affect traditional management approches and theories. As someone with a management background, and working in the enterprise 2.0 industry, i can certainly relate to the subject!
Comments are closed.